Caroline Peters was engaged by Andrea Breth at the Berlin Schaubühne already during her final year of studies. Engagements at all of the important German-language theaters followed, at the Schauspielhaus Hamburg, Cologne and Zurich as well as the Volksbühne Berlin. Since 2004 she has been performing at the Burgtheater in Vienna. The actress is a master of timing, effortlessly changing from sensitive observations to furious performances. The press values her remarkable and precise performances, with which she moves expressively between genres in her roles. They testify to a pronounced feeling and sensitive intelligence for the ambivalent motivations of her characters.

On stage, it is collaborations with Barbara Frey, Dimiter Gotscheff, Karin Beier, Luc Bondy, Nicolas Stemann, René Pollesch and Simon Stone that significantly change and shape contemporary theater. In movies she has successfully and repeatedly worked with Adolf Winkelmann, Arne Feldhusen, Christoph Schnee, Eva Spreitzhofer, Isabel Kleefeld, Jan Schomburg, Sathyan Ramesh, Sönke Wortmann and Vanessa Jopp - from independent films like 'Schöne Frauen' (Beautiful Women) or ‘Womit haben wir das verdient?’ (What Have We Done to Deserve This?) to box office successes like 'Der Vorname' (How About Adolf). Her main role as 'Sophie Haas' in the cult series 'Mord mit Aussicht' (Murder with a View) made her popular to a wide audience.

Her fast-paced, on-the-spot, and intelligent portrayals of human motives have made her a much sought-after actress in film and theater and have been awarded many honors, including the Adolf Grimme Prize, the Bavarian Television Prize, and the Ulrich Wildgruber Prize. Caroline Peters was awarded the German Actor Award 2016 as 'Best Actress in a Comedic Role'. In 2020 she played the Paramour at the Salzburg Festival. The renowned theater magazine Theater heute honored her as 'Actress of the Year 2016' and 'Actress of the Year 2018‘. In 2018 and 2020 she was also honored with the prestigious Nestroy Prize for her outstanding acting performance.

Caroline Peters works as an actress in the German-speaking world and lives in Berlin and Vienna. More on the artistic activities of Caroline Peters can be found at www.schlag-agentur.de. 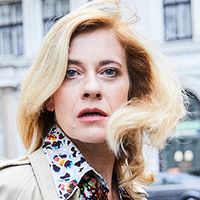 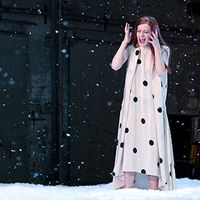 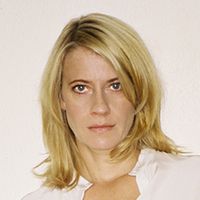